Hi loves, if you know me then you will probably be aware that I am obsessed with musicals. They just sweep me up and I get lost in a beautiful moment. Basically I love them.

Therefore, today I am writing about a show I went and saw this week! This one has been on the list for a while. I mean there are so many more I just want to see but at the moment with Christmas and savings it is just not something for me to be spending my money on right now.

However, I had the lovely opportunity to book to see Waitress in London with my mum, my brother’s girlfriend and her mum and sister, and definitely could not pass that up! Plus it made for a perfect girls night.

I decided to book the day off because there would be no way I would have made it in time straight from work. This also meant we could all go up a bit earlier and have dinner and a cute walk around Covent Garden to see the Christmas lights at night. It was beautiful. There is just nothing quite like some Christmas lights.

Thoughts before the show:

I have heard mixed reviews about this show; some really enjoyed it, others didn’t and some were in-between. However, like every show I always go in with an open mind because as individuals we all experience things differently. Of course naturally I was excited because I love seeing shows.

As I mentioned I actually took the day off, which was perfect timing as work was beginning to feel stressful. This just meant I could get some other bits done during the day and then have no rush to meet everyone at the station etc. We decided to go to TGI’s near Covent Garden for dinner, just because the prices are ok and it was near where the show is. This also meant we could all have a catch up over food and drinks which was nice.

We were very lucky to get seats in the stalls for a good price, and honestly I always feel so weird sitting so close to where the people perform but it was great. It was not sold out but it was not empty if that makes sense, but it was a Wednesday night and of course the weekend’s are always busier, so just remember that if you are booking.

The show I thought was funny, and I was not expecting it to be as funny as it was. I have a weird sense of humour though and this hit the nail on the head for me because I loved it. The beautiful actress that played “Jenna” (Lucie Jones) had a spectacular voice and I was in awe every time she sang. The other ladies Sandra and Laura were amazing as well. One of my favourites was Dr Pomatter (played by David Hunter) and Ogie (played by Joe Sugg). Both of them just made me laugh constantly and I just thought they were brilliant.

One thing I do have to say is that there is some disturbing or triggering scenes which is something to consider when going to watch it.

Overall I enjoyed the show and it inspired me in ways I didn’t even know. I think it was definitely something I needed at the right time, and I am glad I went to see it. The singing and songs I thought were great as well for what it was. I won’t lie as I think other musicals have better songs, but for the story and the show I think they did the job. Also I love Sara Bareilles who wrote the lyrics and music for this show, if you don’t know her then check her out! I think if you are looking for something a bit cheesy, fun and uplifting then I recommend this show. I will now be listening to the soundtrack on repeat for the next few days.

24 year old just wanting to write with her spare time. View all posts by gemmaajaynee

Hello I am Gemma and I am 25 years old and this is my blog!

I mainly write about my life and beauty, travel, fitness, health and anything that I am passionate about.

Feel free to have a look around, follow me on my socials and interact with me! 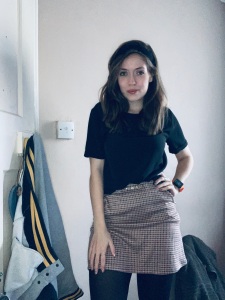